YWCA has been at the forefront of the most critical social movements for more than 160 years — from women’s empowerment and civil rights to affordable housing and pay equity, to violence prevention and health care.

Learn more by exploring the timeline below. Click to expand sections. 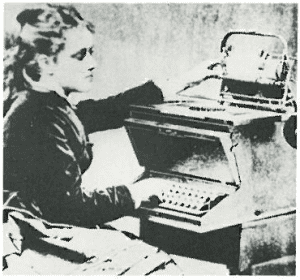 The first association in the U.S., Ladies Christian Association, was formed in New York City. 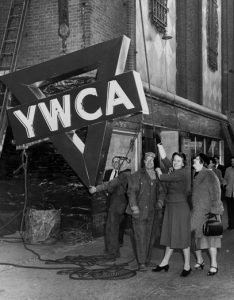 “YWCA” was first used in Boston.

In a YWCA Boston residence for girls, board members installed pulley weights on the back of closet doors, allowing girls from farms to continue to exercise in the city.

The first YWCA student association is established in Normal, Illinois.

The YWCA opened a low-cost summer “resort” for employed women in Philadelphia.

YWCA Boston offered a course in calisthenics for young women at a time when women are considered too frail for exercise.

YWCA Chicago provides medical services at the homes of the sick, becoming the forerunner of the Visiting Nurses Association.

The first YWCA for Native American women opened at the Haworth Institute in Chilocco, Oklahoma.

The United States, England, Sweden, and Norway together created World YWCA, which today operates in over 125 countries.

YWCA was the first organization to introduce the positive health concept and sex education in all health programming. 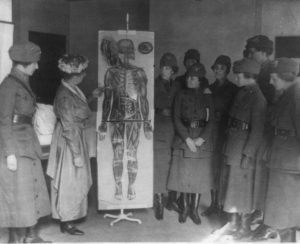 YWCA of the USA was incorporated in New York City.

YWCA was the first industrial federation of clubs to train girls in self-government.

The YWCA National Board created a commission on sex education.

YWCA was the first organization to send professional workers overseas to provide administrative leadership and support to U.S. Armed Forces. 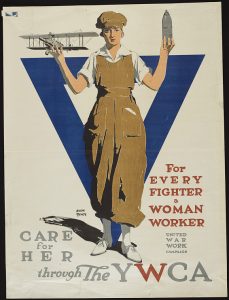 YWCA participated in the U.S.O. Hostess programs during World War I. 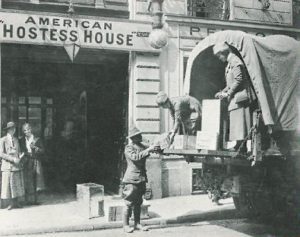 During the war, Black women joined war service organizations like YWCA and established their own groups, to meet the specific needs of Black soldiers. This also drove and encouraged their own political activism, to improve opportunities for themselves.

YWCA’s program on social morality became the official Lecture Bureau of the Division of Social Hygiene of the War Department “to cultivate an attitude of honest, open, scientific interest in the subject of sex.” 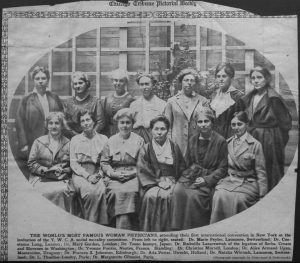 YWCA of Montclair-North Essex, established in 1912, bought a house to serve as its headquarters, and used the property for offices, dormitories, and as a social center for Black women until 1965. It was the first Black YWCA in America not affiliated with a white YWCA. 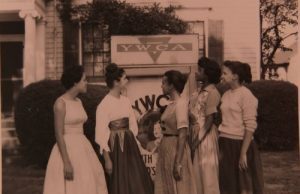 Based on its work with women in industrial plants, the YWCA Convention voted for “an eight-hour-per-day law, prohibition of night work, and the right of labor to organize.” 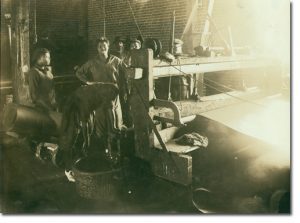 YWCA encouraged members to speak out against lynching and mob violence, and for interracial cooperation and efforts to protect Black people’s basic civil rights.

A YWCA National Board Member was sent to Decatur, Alabama, to monitor and assess the administration of justice in the Scottsboro case.

The YWCA in Columbus, Ohio, established a desegregated dining facility and is cited by the Columbus Urban League “for a courageous step forward in human relations.” 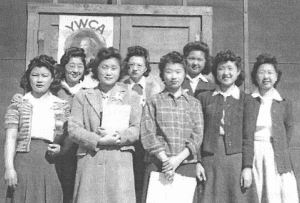 The YWCA National Board appeared at the U.S. House of Representatives and the U.S. Senate hearings in support of permanent Fair Employment Practices Committee Legislation.

Interracial Charter was adopted by the 17th National YWCA Convention, establishing that “wherever there is injustice on the basis of race, whether in the community, the nation, or the world, our protest must be clear and our labor for its removal, vigorous and steady.” This was eight years before the United States Supreme Court decision against segregation.

The YWCA National Convention pledged that YWCA will work for integration and full participation of minority groups in all phases of American life.

U.S. YWCA leaders were sent to address local villages of African countries that were becoming independent, telling the YWCA story and helping women marshal their own leadership and pool resources to create YWCAs in Kenya, Uganda, Rhodesia, South Africa and elsewhere.

The YWCA National Convention committed local associations and the National Board to review progress towards inclusiveness and decide on “concrete steps” to be taken. 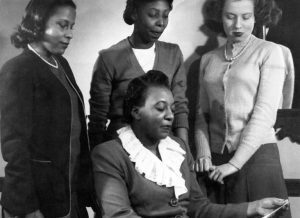 In the 1940s and 1950s, YWCA pushed to integrate racially segregated housing at associations across the U.S.

The YWCA National Board became a sponsoring agency in 1963 for the summer March on Washington for Jobs and Freedom in Washington, D.C., where Dr. Martin Luther King, Jr. delivered his “I Have a Dream” speech. 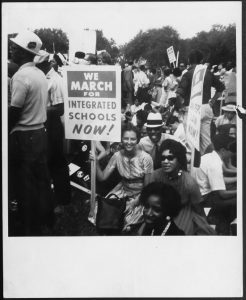 The YWCA National Board voted support for A Direct Action Program, a two-year project to complete desegregation of Community YWCAs. 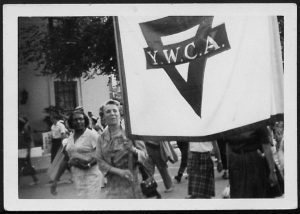 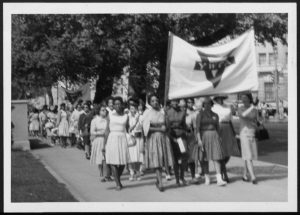 The National Board of the YWCA created the Office of Racial Justice to lead the civil rights efforts, and appointed Dr. Dorothy Height as director. 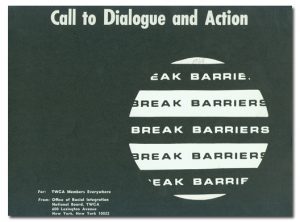 The Office of Racial Justice engaged in efforts such as sponsoring a program in 1967 and 1968 to promote” dialogue group workshops” on racial justice issues in community and student YWCAs.

The YWCA National Board voted to participate in Project Equality and reassessed its business dealings with companies that have discriminatory employment practices, including withdrawing funds from banks that overtly participated in the South African Consortium.

YWCA women marching on the National Mall in Washington, D.C. in 1968, joining a rally that was part of the Poor People’s Campaign. 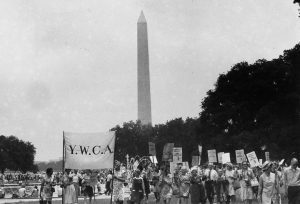 The 25th National Convention, held in Houston,  adopted the One Imperative: “To thrust our collective power towards the elimination of racism, wherever it exists and by any means necessary.

The National Convention also voted to emphasize the importance of repealing laws restricting or prohibiting abortions performed by a duly licensed physician. 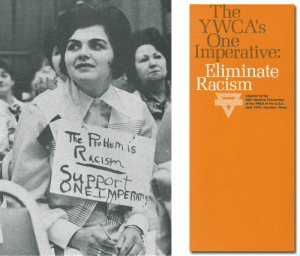 Expanding on their existing health and fitness programs for women, YWCA established ENCORE, an education, exercise and support program for post-mastectomy patients.

The 26th National Convention held a silent march and sets up a defense fund to protest the treatment of American Indians at Wounded Knee Reservation, South Carolina. 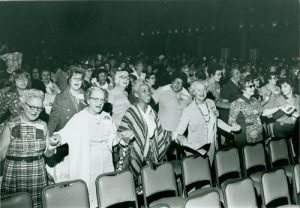 YWCA established “Fund for The Future,” designed to help with the cost of operations and education programs.

The YWCA National Board urged Congress to support legislation that opposes the South African policy of apartheid.

YWCA joined the pro-choice demonstration March for Women’s Lives in Washington, D.C., in April 1992, at that time one of the largest protest marches in the nation’s capital.

The YWCA National Day of Commitment to Eliminate Racism began in response to the beating of Rodney King, a Black man, the acquittal of the four white Los Angeles police officers accused of the crime, and the subsequent unrest across the country. 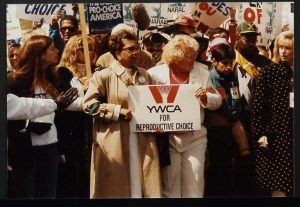 YWCA created its Week Without Violence initiative, an awareness campaign aimed at uniting people against violence in communities. The annual observance is held in the third week of October.

YWCA developed TechGYRLS after seeing the need to strengthen girls’ interest and competency in computer literacy — a key job skill in nearly every profession today. The goal of TechGYRLS is to provide technology education in an all-girl environment where girls feel comfortable taking risks and opening up to new learning opportunities. 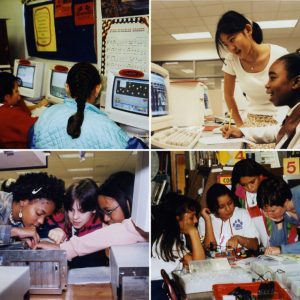 Igniting the collective power of the YWCA to eliminate racism, the YWCA USA’s Summit on Eliminating Racism, was held in Birmingham, Alabama.

YWCA of Trenton, New Jersey, and YWCA Princeton, New Jersey, established the “Stand Against Racism” campaign, which spread to 39 states with over a quarter million participants.

YWCA celebrated its sesquicentennial anniversary, 150 years of service, with the launch of the “Own It” campaign. The campaign focused on igniting a new generation of 22 million young women aged 18 to 34, inspiring them to get involved with important issues facing women and the country today.

At the YWCA Annual Meeting in May 2012, a transition from the prior regional structure to a national federated structure was approved, followed by the adoption of new bylaws in November 2012.

YWCA USA transitioned from an internal national coordinating board to a new board of directors driven by women of influence as well as YWCA leaders.

YWCA USA developed a Mission Impact Framework and Theory of Change to focus and clarify our diverse body of work in racial justice and civil rights, women and girls’ health and safety, and women and girls’ empowerment and economic advancement.

Stand Against Racism became a signature campaign of YWCA USA.

YWCA launched the “YWCA Is On A Mission” brand awareness campaign to deepen YWCA’s impact in local communities and on the national scale.