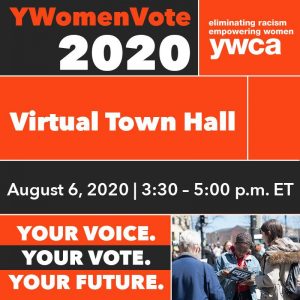 As our nation commemorates the 100th Anniversary of the 19th Amendment, which gave some women the right to vote, and the 55th anniversary of the Voting Rights Act of 1965, which later expanded critical voting rights and protections for people of color, YWCA is convening this Virtual Town Hall to explore the important role of women of color voters in the 2020 election.

Join us on August 6th, as an expert panel of women leaders share strategies and insights to engage nearly 37 million eligible women of color voters in the U.S., break down voting barriers, and increase participation in the 2020 election.